An interview with screenwriter harold l brown regarding the Wildsound Writing Competition. 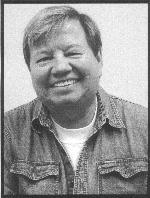 Harold L Brown
Q: What's the title of the script you entered in this contest, and what's it about?

A: The script I entered into the WILDsound Festival is titled “Hope is Not a Black and White Rainbow.”

“Hope is Not a Black and White Rainbow” is a story about a hardened business advisor who tries to untangle the mess left behind when a small town sawmill owner dies, only to uncover a world of complicated race relations and the secrets of his own birth parents.

On one level, “Hope is Not a Black and White Rainbow” explores the growing global village of interracial/mixed heritage families and the devastating affects racism has on the lives of individuals, families and communities. On another level, “Hope” is a personal story about overcoming racial obstacles, a story of humanity at its worst and best—a story about the human condition which at its core is blind to color when the stakes are about survival. It is a story of hope—the essence and reason to live—regardless of our cultural background and heritage. I hope audiences will immerse themselves in the shoes of Nic and Nya, individuals from two different worlds, who are brought together to tackle a universal problem—adapt or parish.

A: I like the idea of breathing life into a story, and short of seeing the movie on the big screen, I like the idea of actors doing live readings. There is nothing more humbling then having your work read by professionals or performed in front of an audience—and WILDsound has done this and so much more. WILDsound has provided invaluable insights into my screenplays and my novel, offering advice that has strengthened my scripts and novel; and made me a better writer.

A: I was extremely satisfied with all aspects. Matthew and the other professional staff at WILDsound have delivered in a very big way, from feedback on my script structure and grammar, to the professional reading of Hope is Not a Black and White Rainbow, to the podcast interview.

A: I had a germ of an idea that kept calling me to write the story, and once I settled in to write the script it took me several months. I did an outline beforehand, but as I delved deeper into the story there were many surprises that emerged as the characters took on lives of their own. The current script is by far the strongest and most focused—in large part due to feedback from WILDsound. Early drafts of the script were more than 125 pages in length and the current script is 110 pages. I have learned that writing is very much about rewriting, and I would guess that this script has gone through at least six major revision drafts.

A: I have used Final Draft for a number of years. I also use good old 3 x 5 cards and the Save the Cat beat sheet to help transform ideas into a story outline. I find that creativity, for me, means applying a combination of writing techniques that seem to tap into different parts of my brain. So I use a computer with Final Draft, good old pen and paper, and even sketch out scene diagrams—all informing the project I am working on.

A: Yes. I have been fortunate to meet a few people in the business who offered some sage advice which I apply in my writing. Norman Jewison told me, “Harold just keep writing.” So I do write—daily, some days I write a lot, other days I write very little. Some days it is a real struggle, other days the words and ideas just flow. Some days I write garbage, some days I don’t. One thing for certain I will sit down and write or type something daily. In terms of hours spent writing, it is as little as two or three hours a day, to ten or more hours a day when ideas are really flowing.

A: Yes, but Robert McKee once told me that writer’s block might just mean that I have not done enough research in preparing to tell my story. Research that is rich in the right kind of detail gives a writer a lot to work with, and the challenge then becomes whittling down and selecting only the relevant (to the audience) details, and determining the order of revealing them to your audience. Don’t get me wrong, research is not everything to writing, but it makes it easier to focus on writing the story.

A: While I did not realize it at the time, storytelling has been in my blood since I was a kid and I got my first guitar. I used music to express what I was feeling. For much of my adult life, technical and business writing has been an essential part of my working life. About fifteen years ago, in addition to my fulltime executive job, I started carving out time to more seriously explore storytelling through film and television. In order to more fully understand the industry and gain a better insight as a writer, I took some acting classes with a Los Angeles film director, got some time in front of the camera and pursued training and gained experience on the producer end of things. All that being said I finished my first screenplay around 2000. When I look back at it, I realize how little I really understood about storytelling at the time, and how much I have learned and am still learning.

To date I have completed seven feature length screenplays that I have felt satisfied with and shared with a wider audience, including screenwriting competitions at film festivals.

A: No I do not. I have spent time in Los Angeles, but except for production requirements to be in Los Angeles, I do not currently have any plans to move to Los Angeles. Now, if you were to ask me about living in Hawaii, well that is a recurring dream I have—to be sitting in my writing studio with a view of the ocean, listening to the waves crash in, breathing in the fresh air. Now that is an environment that inspires creativity, and I try to get at least one month of that Hawaii inspiration every year.

A: At the moment I am working on my eighth screenplay which is a story set in the not too distant future. I have also just completed my first novel and signed a book publisher deal and hope to begin work on my second novel in 2014.