Hangman by Paul Petersen and J.C. Doler has been named the 2021 Screamfest Horror Screenplay Competition Winner. Finalists, Semifinalists, and Quarterfinalists have also been announced. 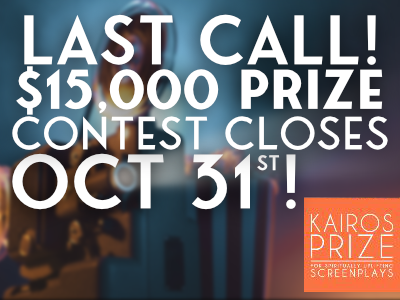 Industrial Scripts has announced quarterfinalists in all categories for the 2021 Titan Screenwriting Awards. [Updated: 10/19/2021]

The winners of Reno-Tahoe Screenplay Contest Spring cycle are now in production. [Updated: 10/17/2021]

The winners of The 2021 PAGE International Screenwriting Awards competition have now been announced, and this year’s $25,000 Grand Prize has been awarded to A.J. Bermudez for her edgy, contemporary action script ICON. [Updated: 10/17/2021]

The Wine Cellar by Lisa Savy has been named the Best Screenplay of the September, 2021 Wiki Screenplay Contest. Chasing the Dark by Mike Bencivenga was named Best TV Pilot and The Impossible Question by Jeremy Germain was named Best Short Script. [Updated: 10/13/2021]

The Austin Film Festival has announced the 2021 Script Competition Finalists. Sixty-four scripts were chosen for the Final Round with one winner to be determined in each of the 18 categories. The winners will be announced during this year’s Conference. [Updated: 10/13/2021]

Mads Gauger and Christan Mary Leonard have been named the Grand Prize Winners of the 2021 Write LA Screenwring Contest for theri TV Pilot, That Woman. [Updated: 10/07/2021]

HollyShorts has named Dummy, by Andrew Kaberline, as the winner of their 2021 Screenplay Competition. [Updated: 10/07/2021]

The Austin Film Festival has announced its 2021 Script Competitions Semifinalists, representing the top 2% of a record field of 14,648 submissions. Finalists will be revealed by mid-October and the winners will be announced during this year's Conference. [Updated: 10/06/2021]

TV Pilot and Feature screenwriting competition Write LA has revealed its top 5 finalists for the 2021 competition. These five writers will now have their scripts read and considered for representation by 5 Literary Management companies: Circle of Confusion, Zero Gravity, Fictional Entity, Grandview and Forward. [Updated: 10/01/2021]