Breaking Walls is a contest for thriller screenplays with contacts at established Hollywood literary representation and production companies who have agreed to consider the full winning script and the top finalists' loglines.

Well-written thrillers are always an excellent way for writers to show Hollywood pros a combination of commerciality, unique voice, and a clear understanding of effective feature film narrative. We're here to break down the walls between your talent and our industry contacts looking for the next great thriller writer!

An interview with screenwriter mike boss regarding the Breaking Walls Writing Competition. 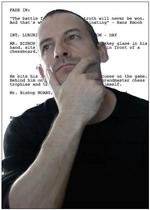 Mike Boss
Q: What's the title of the script you entered in this contest, and what's it about?

A: The title of the winning script is CHECKMATE and it’s about the craziest chess game ever played. Here’s the logline:

In a deadly chess game where chess pieces represent real human beings, two psychopathic men with an egocentric need to be the best, put everything on the line by making the stakes of the game their own lives. Winner takes all.

A: I just finished another little rewrite (tweaked the structure a bit) when I came across the Breaking Walls contest. Since this particular contest exclusively focuses on Thrillers, I thought why not give it a shot! – Yes, I have entered the script in several other contests and I did always fairly well, but I think the adjustments to the structure I just did was the key to make it stand out.

A: So far I’m very happy with the administration of the contest. I did receive the cash prize right away and I’m sure I’ll soon receive the details for my free listing on InkTip as well.

A: I don’t remember exactly how long it took to finish the first draft, but probably a few months. – Yes, I always write some kind of outline and often include pictures. – I have rewritten this script probably between 5-10 times.

A: I only use the software in my brain and Final Draft version 8

A: I only write when I feel like it (Gasp!), but when I’m writing on a new project that inspires me, I can easily write between 10-14 hours every day until it’s finished!

A: When I’m stuck in my writing or I’m not sure how to proceed, I never think of writer’s block, I just walk away and do more thinking until the problem is solved (if I have to think about it for several days, so be it).

A: I got my diploma in Civil Engineering Design in Switzerland, went to the Swiss military, then studied acting in LA where I got into writing. – I have written 14 feature screenplays, a few shorts, 21 episodes of a Web series and one television pilot. Currently I have two scripts optioned and one in the process of selling.

A: Yes, I live in Los Angeles. I left Switzerland in 1995 and emigrated to the USA where I became a proud Citizen in 2005.

A: Before I start writing on a new script I’ll be directing a short film that I have written. – I just had an idea the other day for a new script I’m considering writing, it's about a little girl and a parrot (Family/Adventure/Drama)

Also, after ten years of writing and sending out way over one-thousand query emails and letters, it’d be nice to finally team up with a Literary Agency for future collaborations! :-D