Matt Misetich started as a freelance reader at Script Pipeline in 2006, and gradually assumed more managerial duties until he eventually became the contest's full-time Director of Development. Prior to joining Script Pipeline, Matt worked at the film distribution company, Alpha Media. 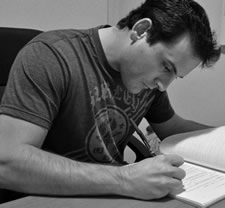 HollywoodIQ: Matt, your title is "Director of Development." Are you guys actively involved in developing material for production?

We are, but not exactly in the same way a typical production company develops scripts. While we're ultimately looking to produce and co-produce films and series, our writer and project development is primarily concerned with getting Script Pipeline competition finalist scripts connected with our industry partners, whether they're producers, agents, managers, directors, or other industry execs.

HIQ: The Script Pipeline Contests have been around for quite a while. Do you think the quality of the scripts you're seeing has improved over the years, or do you think they're getting worse?

Better. I don't know what other competitions would say, but it's not even up for debate ... absolutely no doubt the quality has steadily risen over the past decade.

Yes, we're still getting a small fraction of what I would consider circulation-ready scripts, but we're seeing far less bottom-tier writing. Maybe it's the number of resources available now compared to years back? More writers getting professional guidance? For screenwriting, I'm not positive what sparked the change. For TV writing, it's clear: we receive perhaps 4x the number of original pilots now for the TV Writing Competition than we did in 2008 and 2009, and that's undoubtedly credited to the television landscape and the incredible quality of content we're seeing across the board. Writers who for years may have been trying to crack features with no luck suddenly realize their style is best-suited for TV, and they hit their mark. In both cases, film and TV writing, the environment is just so competitive now, which might seem like a deterrent for new writers just starting out, but this is actually a good thing. It forces everyone to take a greater initiative and, I would imagine, devote themselves fully to their writing goals.

HIQ: Over the last several years, the number of contests available to film and television writers has exploded. Do you think there are too many contests now?

I don't think there are "too many" contests, but the question is, are all contests worth entering? All bias aside, I don't know of any other way for beginning writers to get recognized by upper-echelon companies besides 1) querying those open to new material, or 2) entering and placing in a major competition (of which I'd say there are 5-7 must-enters, depending on your type of material). So not only have contest wins, or finalist placings, not lost meaning, they're more critical now than ever. We have a ton of success stories and lots going on with our alumni behind the scenes. I'm sure it's the same for other big competitions.

HIQ: Do you think a contest win can launch a career?

Absolutely. I know, because we've seen it happen with our own contest winners numerous times -- most notably with Evan Daugherty (Snow White and the Huntsman, Divergent, Tomb Raider), Tripper Clancy (Stranded, Hacker Camp), and recently our 2015 winner Henry Dunham (Militia), who signed with UTA and Madhouse Entertainment a month or so after the contest announcement. Literally life-changing, in some instances. From hitting dead end after dead end to getting recognized as having one of the hottest unproduced specs in Hollywood. It's extraordinary, for both the industry and the writers. If it doesn't happen right away, though (and for every huge success story, we have another contest finalist or winner who hasn't hit their stride yet), it's not the end of the world. I can't speak for other companies, but with us, we're in it for the long-term, helping our former finalists get their work circulated for potential production or assisting in their search for representation.

At the end of the day, yes, the industry wants marketable scripts, but first, they need writers dedicated to the craft. It's our job to make that process easier.

HIQ: How many of your contest winners have been produced?

Evan's contest-winning script Shrapnel was produced and released in 2012, starring Robert De Niro and John Travolta, after a rewrite and title change (Killing Season). As of late 2015, Tripper's winning script Henry the Second is headed toward production, with Shawn Levy and 21 Laps producing with 3311 Productions. That seems to me like a great marriage, too, so I'm really looking forward to seeing that project move forward. Other recent contest winners are in development, but no official word on production yet. For both Evan and Tripper, we introduced them to management. Actually the same manager in this instance, Jake Wagner (Benderspink).

There's no real formula to getting a film or series off the ground, way I see it. As Tripper put it in 2015 after Henry the Second came together after five years, you need someone to believe in the project and shepherd it over the long term. You can't give up on it. I feel the same way about our process of industry circulation. While it's fantastic that writers get an initial round of industry exposure after winning a contest, opportunities also exist further down the line, so Script Pipeline is focused more on the big picture than the immediate results.

Not necessarily. Maybe I'm being overly optimistic, but if a script is good enough to win a contest, it's good enough to get produced. It might not be production-ready, however it'll have enough elements with the story, the character, the concept, and so forth to warrant being made into a film (or TV series). And I say that based on Script Pipeline's criteria which, for our main Screenwriting and TV Writing Competitions, rests almost exclusively on writing ability. We do take concept and market potential into consideration, but it becomes more of a factor in our genre-specific First Look Project competition. Honestly, I've never read a great script and said, "this is amazing, but no one should produce it."

HIQ: What are the most common mistakes you see in the scripts submitted to Script Pipeline? How could your contestants improve their odds of success?

A lot of writers think their scripts get turned down because of minor errors -- formatting, or style, or the avant-garde concept, or the level of violence, or a scene that didn't fit, or a poor ending ... I mean, any number of reasons that aren't anywhere near the real reason, which is writing and storytelling ability. I could write a book (or at least a very long pamphlet) on common mistakes and how to improve the odds of getting noticed, but it all boils down to effort and execution. Any veteran development person will immediately recognize whether or not a writer has educated themselves enough to tell a compelling story and write a proper script on a basic level. Amongst a hundred different pieces of advice, that's always number one: get the fundamentals in place. Everything else comes after. At the end of the day, yes, the industry wants marketable scripts, but first, they need writers dedicated to the craft. It's our job to make that process easier.