Troy Anthony Miller is a writer, filmmaker, and improv comedian. His screenplay The Hitch was the 2013 AFF Horror Award Winner, subsequently optioned by Frank Darabont's Darkwoods Productions. Troy has done rewrites on the Mira Sorvino thriller Beneath the Leaves, and was named as one of AFF's "25 Screenwriters to Watch" in 2016 in partnership with MovieMaker Magazine. In 2017, Troy became a two-time AFF winner by winning the Comedy Award for his feature screenplay The Olympian. 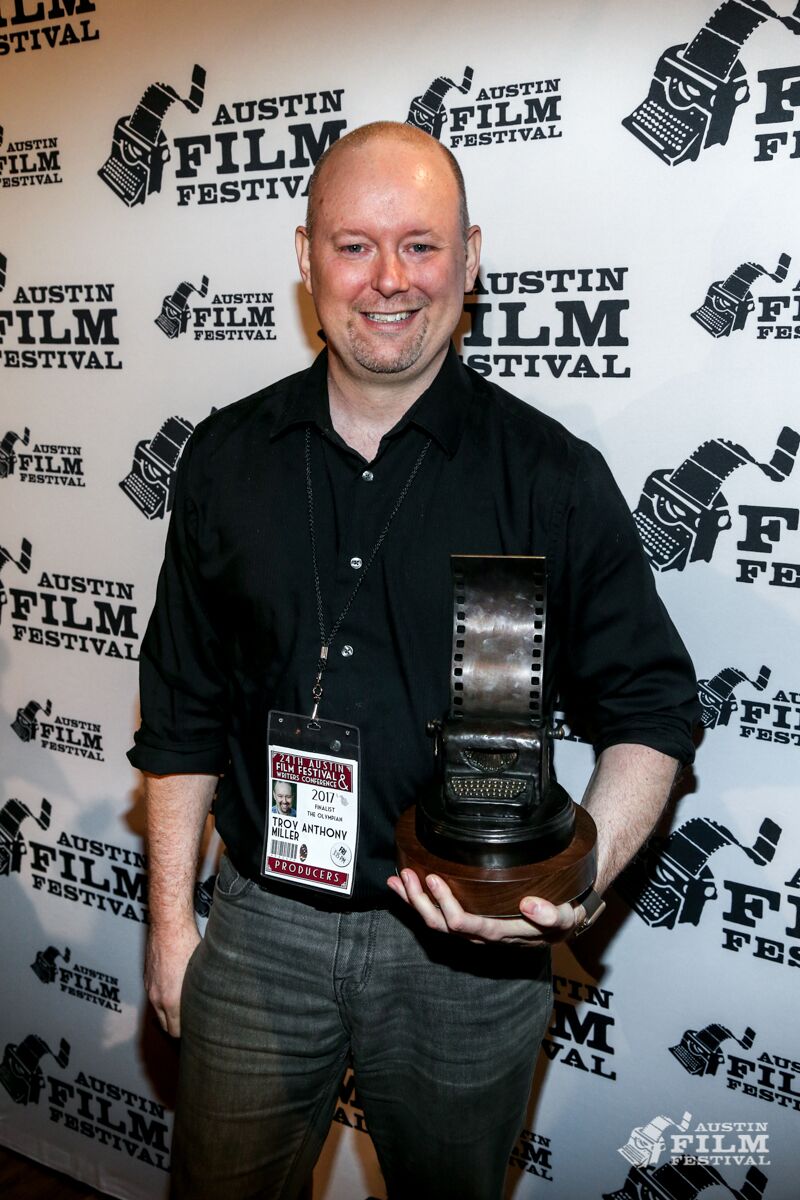 There is one and only one reason I became a writer ...

I couldn't draw to save my life.

I mean, I dunno. I guess I could draw. It's just that I had no sense of dimension, or style, or really any sort of skill in the manipulation of lines and shapes into aesthetically pleasing figures. But I loved telling stories. So when my mom let me bang on the keys of her monstrous electric Royal typewriter as a kid, I found my calling.

But let's skip ahead. You know, to the juicy stuff. My writing really took off when I joined an improv class. See, when you don't have the luxury of a script, you have to constantly be working the skills of surprise and delight, because there's no telling where the story will go next. Or when it will all end. Or how.

The reality is that an option is no guarantee a movie will get made, or a career will be born. Movies can take years to be put together. And they can fall apart at any time in the process--most of them do. In fact, most of them never even get off the ground.

I think you know the answer.

Now, I have the absolutely humbling and mind-blowing experience of having won the AFF Screenplay Competition twice. Once with a feature comedy, once with a thriller. Both times were nothing short of surreal, but especially the second time (last year, the comedy). The awards banquet, if you've never been, is something akin to the Golden Globes. Round tables, dinner style, with good food that you can't possibly eat while the anxiety of waiting to hear your name being called (or not) sits in the pit of your stomach.

But let me go back to my first win. Back in 2013. Over four years ago. Because that win became like a seed being planted in the soil of a writing career that is just now starting to sprout.

I'd written a screenplay called The Hitch, about a young Alfred Hitchcock accused of murder in Los Angeles and going on the run to prove his innocence. The award was sponsored by Darkwoods Productions -- Frank Darabont's company. They called a week after the fest and asked if they could option it. For a minute, I thought that was it. The big break we're all looking for.

The reality is that an option is no guarantee a movie will get made, or a career will be born. Movies can take years to be put together. And they can fall apart at any time in the process--most of them do. In fact, most of them never even get off the ground. Which was my story.

Well, just what is my story? It isn't the option or its early potential for fortune and glory. See, the AFF win got my script out there and read. Which is how I met my current writing partner, who used to work in film acquisitions. He read The Hitch, liked it, and wanted to meet. We stayed in touch, and a friendship grew. When I eventually moved out to LA a couple years ago, we decided to collaborate on something. And that something was a spec script about the Challenger disaster.

Cut to right now. That script has found an exceptional producing team, and is on a path to production (I know--trust me, anything could stall this project, though I'm quite hopeful). But just as importantly, the project has found my writing duo representation on both the agent and manager side, and now we're taking meetings on exciting opportunities. And maybe, hopefully, even probably, I'll finally take my first paycheck for writing something in film or TV by the end of this year.

And when that happens, it will have been five years since that first AFF win. Let that sink in, dear reader. And please take what I'm about to say to heart, because it might very well save ... your ... life! (Music crescendos!)

See, talent is about 50% of your path to success. The other half is cultivating relationships, being persistent, and understanding that this crazy, exhilarating, heartbreaking, fever-inducing journey you are on is a long game. You have to get yourself positively Zen about being patient A.F.

And for assistance with all the above ... wait for it ...