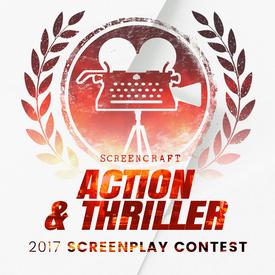 The action genre is the one genre that producers and literary managers have recently requested the most, and which we have the least. So this could be one of our most successful competitions! Our jury is looking for emerging voices in the action movie genre. Whether you have a big-budget, tentpole family adventure movie, or a taut, low-budget action film, we want to read your script. Professional feedback from studio-trained readers is available on all entries.

Quarterfinalists have been announced from among more than 700 submissions to the 2018 ScreenCraft Action & Thriller Screenplay Competition. This year’s jury is comprised of producers and executives at Appelles Entertainment, Bad Robot, Columbia Pictures, the Donners’ Company, a manager at Elevate Entertainment, and the screenwriter of Die Hard and Lara Croft: Tomb Raider. [Updated: 11/26/2018]

Get It Together by Matthew Ryan has been selected as the Grand Prize Winner of the 2017 ScreenCraft Action & Thriller Screenplay Contest. [Updated: 01/22/2018]

Colin Dalvit & Andrew Lahmann won the 2016 ScreenCraft Action & Thriller Screenplay Contest with their script The Timbermen, an action-horror hybrid about a desperate father and son who join a group of rough lumberjacks on a dangerous mission in the Washington Territory in 1878, and must then fight to survive ferocious monsters deep in the mountains of the Pacific Northwest. [Updated: 02/24/2017]

The Timbermen by Colin Dalvit & Andrew Lahmann (with story contributions by Ben Eisner) has been selected as the Grand Prize Winner of the 2016 ScreenCraft Action & Thriller Screenplay Contest. [Updated: 01/20/2017]

ScreenCraft has announced THE ENEMY WITHIN by Ken Miyamoto as the grand prize winner of the 2014 ScreenCraft Action & Thriller Script Contest. [Updated: 12/31/2014]