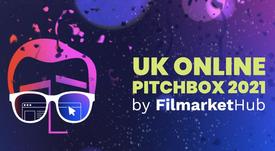 The Filmarket Hub platform has launched the 2021 edition of its UK Online Pitchbox - a two-day virtual pitch event dedicated to British feature films and scripted series in development.

For the fourth consecutive year, this online initiative aims to discover high quality unproduced projects; either at the script stage or with some finance secured and matches them with leading companies in the industry.

Unproduced British feature film in development with the materials below:

Unproduced British scripted series in development with the materials below:

7 feature films and 7 scripted series will be selected by Filmarket Hub to participate at the event, which will take place online in July. Representatives from the selected projects will have the opportunity to pitch and meet each of the participating executives in 1 to1 meetings.

In addition, all the selected projects will get an invitation to join the Filmarket Hub online marketplace and be featured in the Filmarket Best Project Selections. They will also be recommended in a mail-out to Filmarket Hub’s international database of Film/TV companies.