To make Hollywood more accessible than ever before to more aspiring global screenwriters, Filmmakers is forming strategic alliances with the powers that be in Film and TV Script Writing; who are in search of top Screenplays & Writers... Filmmakers Championing Emerging Artists.

FilmMakers International Screenwriting Awards has been in existence since 2000 (formerly known as The Radmin Company / FilmMakers.com Screenplay Contest) and its association with the Radmin Company has been going on since late 2000.

All entries must be submitted online only. Please see website for complete rules. http://filmmakers.com/screenplay/#Rules

A) Certificate of Achievement Award 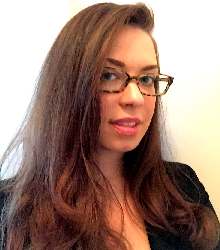 Ruby Akin is a New York based writer, artist and mother. She studied screenwriting at New York University and The New York Film Academy. She was a quarterfinalist in The Academy Nicholl Fellowships in Screenwriting Competition for her script "The Tailor from Taegu and Mrs. Abernethy." Ruby is also currently working on a series of art and film projects that address sociopolitical issues.

"THE TAILOR FROM TAEGU AND MRS. ABERNETHY"
Logline: New York City's Lower East Side 1945: Struggling Korean-American tailor, Kim Lee, pursues a passionate love affair with a seductive white war widow, Libby Abernethy. But when her mentally unstable, shell shocked brother-in-law returns from the war determined to force Libby into a loveless marriage, their secret is revealed, and Kim must risk his life to protect the woman he loves from a dangerous and damaged man.

I knew I wanted to be screenwriter when..

I've wanted to be a screenwriter for nearly as long as I've been watching movies. I was a big cinephile as a kid, thanks in part to my father; we'd watch movies together and talk about them often. Since I was always writing anyway, I started working on stories I wanted to see on the big screen.

I know I've succeeded when...

I know I've succeeded when I can I get a genuine emotional response from an audience.

My inspiration to write THE TAILOR FROM TAEGU AND MRS. ABERNETHY

My inspiration to write the "Tailor From Taegu and Mrs. Abernethy" came from a combination of things that struck me at the same time, unexpectedly. One afternoon I was walking on the Lower East Side when it started to rain heavily so I ducked into an empty coffee shop. Vera Lynn's "You'll Never Know" was playing, it made the place feel haunted, almost like I'd stepped into another city in another century. At the time I was also following the story of a man who had been politically targeted and accused of a crime he didn't commit, and the combination of the music, the smell of coffee, cigarettes and rain had my senses peaked, which led me to decide on the atmosphere, the setting and the kind of character I was interested in writing about.

FilmMakers Magazine: What inspired you to write?

Ruby Akin: Every film I've ever seen and book I've ever read, that has moved me.

FilmMakers Magazine: Is this your first script and how long did it take you to complete?

FilmMakers Magazine: Do you have a set routine, place and time management for writing?

Ruby Akin: I write at home mostly. I try to put in at least an hour of work per day or more there, but it's important to change my routine and location when I feel like it's getting stale. I write my first draft out longhand because there's something about using a pen instead of a keyboard that makes it more intimate for me. Music is also a great source of inspiration during the creative process. I like to have a play list handy while working.

FilmMakers Magazine: Do you believe screenplay contests are important for aspiring screenwriters and why?

Ruby Akin: Absolutely. Why? Contests are a great source of support and recognition for up-and-coming writers. They're an excellent way to get your work in front of producers, agents and managers and talent.

Ruby Akin: Filmmakers International is an excellent venue for writers to showcase their work! They are dedicated to helping new talent succeed and they have great sponsors working with them.

FilmMakers Magazine: What script would you urge aspiring writers to read and why?

Ruby Akin: I've found it's worthwhile to read scripts in the genre you're working in. "Blade Runner" is a fantastic screenplay. It has so many elements to it: Futuristic, neo-noir, romance, suspense, action, thriller and even a dash of dark humor. I learned a lot from it.

FilmMakers Magazine: Beside screenwriting what are you passionate about and why?

Ruby Akin: Traveling! It's a great source of continuing education for me.

FilmMakers Magazine: Who is your favorite Screenwriter and Why?

Ruby Akin: I'd have to say Woody Allen. He's actually pretty versatile. Not many screenwriters have been able to write, direct and act in so many of their own films. I really admire how he's able to cross genres too. He can write a great suspense thriller just as brilliantly as any of his comedies and he'll sometimes have elements of both in the same film. It's bewildering how he's able to extract comedy from tragedy with such mastery, but he does it often. He's also great at engaging his audience in a very personal way.

FilmMakers Magazine: Name the director you would love to work with and why?

Ruby Akin: Tough question - it's a toss up between Adrian Lyne and David Lynch. Lyne really understands emotional conditions under the influence of love and infatuation. Many of his stories depict the darker side of passion and its hold over the human soul, he skillfully does this by revealing the secret dream-like world his characters live through while madly in love. David Lynch knows how to captivate his audience and take them on a journey through raw emotion, with characters that both frighten and fascinate. He's one of the all time great surrealists but he's also an expressionist. He's my kind of director.

FilmMakers Magazine: Name the actor you would love to work with and why?

Ruby Akin: Jeremy Irons, in my humble opinion he's the most talented actor working today. He presents tremendous depth and realism in every part he plays.

FilmMakers Magazine: Any tips and things learned along the way to pass on to others?

Ruby Akin: I think it's important to learn how to hear criticism impersonally. It takes a lot of courage to show people your work, but knowing what to edit out is crucial. You may write a fantastic scene but it doesn't mean it's a necessary scene. When it comes down to it, if you've written something that doesn't move the story forward, or reveal something relevant about the character, it's got to go. In my experience it really helps to hire a script analyst or get the opinion of three people who you really trust: if they all agree about a scene that bugs them then it's pretty safe to say you should probably go back and rewrite it, put a different scene in front of it to make it clear, or cut it out completely. For a writer that can feel like cutting off a finger (dramatically speaking) but in the end you don't need the dead weight of an unnecessary scene.

FilmMakers Magazine: What's next for you?

Ruby Akin: I'm looking forward to pitching this script along with others I'm working on now. I just finished a romantic drama and I'm currently working on a dark comedy.