Zed Fest was formed to acknowledge and encourage new independent filmmakers and screenwriters.

We noticed that there are a lot of talented and promising filmmakers and screenwriters that tend to get snubbed by other festivals and competitions simply because they are low budget or less polished. We want to give them the recognition that they deserve and try to help them build upon their abilities.

An interview with screenwriter Christian Ackerman regarding the Zed Fest Writing Competition. 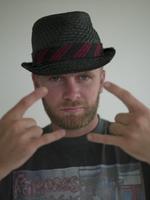 Christian Ackerman
Q: What's the title of the script you entered in this contest, and what's it about?

A: "Hell's Belles" is a horror-comedy about a young woman content with working as a mortician at her family's cemetery, but as business declines due to a local rival, a gateway from hell opens in her graveyard, releasing a demonic horde out to get her soul. With the help of her best friend and some unusual allies, she must fight to keep the cemetery while battling an army led by one of the Seven Princes of Hell!

A: Since we were already entering the short film version of Hell's Belles into Zedfest, we decided to enter the feature script as well. Their submission fees are very reasonable and something about it felt right. This is the first contest we've entered so far.

A: Yes, Ed and Wendy over at Zed Fest were fantastic! We really enjoyed the atmosphere of the festival and they were very accommodating. We were in disbelief when they announced we won 8 for the short and 1 for best feature screenplay! They'll be having a ceremony in a few weeks to give away all of the awards!

A: I began writing notes on the idea about 4 years before it was finished. I then put it aside and made a short film with the same lead characters. I then brought the notes to my writing partner Chuck Foster and we got started. The plan was to write the feature while we were sending the short out to festivals. It took us about 7-8 months of nighttime writing to hammer out the first pass, since he lives in New York and I'm in LA.

We made a semi-loose outline, which served us pretty well. I brought enough notes and scenes to make a fairly strong outline right off the bat.

We made a "first pass" as we call it, then revised it into a real first draft that friends could read. Actually we sent it to the festival at that point. It was our first draft.

A: Final Draft Word "Notes" Ap for the iphone & ipad (for writing notes & dialogue) "Notability" Ap for ipad (wrote revision notes onto a PDF of the script when my Final Draft laptop wasn't around)

A: I don't write every day. That doesn't sound like fun. But when I am in the middle of a script, I like to. It's nice to take breaks when you're done with a draft to get some distance from it.

When Chuck and I wrote Hell's Belles we went on a fairly strict regiment of Sunday through Thursday nights. Most of those nights we worked about 3-4 hours. Party time on the weekends. Fortunately, I didn't have to work-work a lot for a good 5-6 months, so I was able to concentrate on the script. I would wrote notes and scenes to present to him at night. I was also heavily working on the short, so it was a busy year.

A: Who doesn't get writer's block? At some point the light bulb will flicker enough for you to find the switch. You just can't close your eyes in the dark. Since I write horror, if I'm super stuck I may watch a film, wander a cemetery, drive through the Hollywood Hills sloppily writing with a pen and pad, stand on my bed, move to another corner of my apartment, change the music I'm listening to. But when I write with Chuck we don't get stuck for very long. Hammering out an issue is 10 times easier with a trusted partner. We would have had a hell of a time writing Hell's Belles without each other.

A: I went to Cal State Northridge for Film Production, then worked in TV for several years until I went freelance. I've Co-Directed a documentary feature, Associate Produced a horror feature, Art Directed several shows, and been a man of many entertainment trades. I've written several short scripts and one other feature script with Chuck Foster besides Hell's Belles, "House of the Unholy".

A: Yes. I'm not goin' anywhere. I want to live where the films take me though.

A: Chuck and I wrote a horror-comedy short called "Son of a Bitch" that I'll be shooting in 2013. We'll also start on our next feature script once we settle on an idea.

Thanks to MovieBytes for having us, to Zed Fest for honoring us, and to you for reading this!