An interview with screenwriter Richard Harrison regarding the Wildsound Writing Competition. 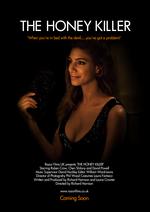 Richard Harrison
Q: What's the title of the script you entered in this contest, and what's it about?

A: The script is called, 'SHOOTING STAR' and it has won September's Best International Screenplay. It's a 'rock n roll' road movie, a story of love and revenge. A beautiful, young female grifter, realises the the guy she's in love with is more committed to their lifestyle than her, and in desperation steals the only thing he has of value that could be her chance of security ( the key to a safe deposit box) and leaves him. We start the film three years after this event with her ex-boyfriend, Kelly, hunting her down across New Mexico for the key. The obvious motive is 'money' but its really about 'love' and recapturing that one moment you had in your life with someone you love.

A: I think what influenced me the most to enter WildSOUND was the full appraisal of my what I had written. None of us know what we've written, we think we do but we don't, no idea, we're clueless. We're just sunk in our own vision, and when I saw the full appraisal as part of the competition, I was sold. Then, I got my appraisal and it was possibly the best I have ever received, not because it was good or complimentary, but because they had obviously read it, and I mean completely, and they properly criticised it! So their comments were not only 'left of field', but they were an accurate observation and they actually improved the script, not matter how hard they were to swallow. WildSOUND was so worthwhile it was worth the price of entry just to get that feed backlet alone winning, that was a real surprise. Winning didn't even cross my mind, I needed to know what professional people thought of it. Me and the guy who I created the story with, Dave Powell, are over the moon. I hadn't entered into any other contests, but since WildSOUND I have entered it into another four or five.

A: I was more than satisfied with how this festival was run. When I received the appraisal it kind of blew me away that they had read my script so intimately that they had not only grasped it, they could see what was wrong with it to improve it. That one appraisal literally changed how I felt about my script, it made me feel incredibly positive, and after two years of work that really is something! And yes, they met their deadlines and I did receive all the awards I was promised, unlike some festivals I can name but I won't (PS I won Best International Feature Film for Producing & Directing, 'The Honey Killer' at one of the biggest Indie film festivals in Florida and to this day, they have refused to give me my award for it. Beware of The Sunscreen Film Festival in Florida. Real Charlatans!)

A: It took two years to write the script, which isn't bad for something that I want to be a major feature film that I will Direct (my 2nd). I didn't write an outline before, but I sat down with my co-creator, Dave Powell, for many, many days discussing the storyline, the character arcs and the story arc and all the where's and how's of where it was going to go before the writing started. On drafts, I must have lost count around 16/17. I am guessing somewhere between 30 to 36 drafts minimum.

A: For software I invested in Final Drafts years ago, so that's what I use and I don't really know any other. I am more that happy with it anyway. Its nothing to do with the software my friend, its what's in your head and how many hours you're prepared to sit down and write, and by hours I mean, then months, and maybe years....

A: No, its impossible, I have a day job. Some evenings I might write two to three hours, but at weekends I can write on and off for sixteen to eighteen hours easily....go down the pub, come back and knock out some more. When you get on a roll DONT STOP! That's one of the best tips I can give anyone.

A: Yes, lots. I have been writing for about fifteen to sixteen years, hmmm, I don't know the cure!!! I have it right now on a new screenplay to follow up the cult movie I wrote and directed called, 'The Honey Killer'. If anyone has any ideas, please email me!!!!

A: My background is in Factual TV in the UK, Producing, Directing, Edit Producing and scripting Documentaries/Factual TV. I have certainly learnt a hell of a lot about filmmaking from working in TV and it has certainly given me a lot of confidence, but nothing, NOTHING compares to stepping up and Producing and Directing your first feature film, like I have on a guerrilla filmmakers budget. Nothing compares, it really is where the men get separated from the boys, or the girls separated from the women! Please look up 'The Honey Killer' on IMDB, contact me and I email you a secure copy! Three international festival wins and a cult move following www.thehoneykiller.com. You know nothing about filmmaking until you've succeeded/failed with your first feature film, and forget short films, they're a total waste of time.

A: I don't live there now, but ironically I am going back for the whole of October with 'Shooting Star', my award winning screenplay at WildSOUND. I'll be cold calling, touting round, calling people up I know connected with the movie business and seeing if I can get some leeway with it! Let's see, if anyone out there is interested, get in touch with me through www.razorfilms.co.uk

You don't need to be in LA but it certainly helps, and if anyone is thinking of moving there, you need to make LA work for you, it won't come to you, but the opportunity is there unlike anywhere else in the world. I personally like in there a hell of a lot.

A: Next is securing the budget and one or two star names to get 'Shooting Star' made, that's my priority and why I am off to LA in October. I am also trying to write a follow up to my cult movie, 'The Honey Killer', but I am struggling with it at the moment. My last comment is, a big heads up for WildSOUND. They are what a screenplay festival should be! Check out what I am working on via www.razorfilms.co.uk . Thanks guys, Richard Harrison