An interview with screenwriter Jeffrey van Davis regarding the Worldfest - Houston Writing Competition. 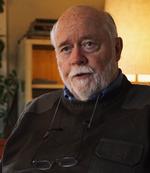 Jeffrey Van Davis
Q: What's the title of the script you entered in this contest, and what's it about?

A: "Heidegger in Ruins" is about a philosophy professor obsessed with Heidegger who has a nervous breakdown in front of his students. This leads him on a personal journey into the evils of the Holocaust and into his own fears. He revisits the loves and losses of his life - his high school sweetheart Rhonda, who served as a nurse in Vietnam and suffers PTSD; his childhood buddy Jerry, who is killed in Vietnam and the ghost of his father killed in World War II.

"Heidegger in Ruins" is set against the backdrop of an idyllic America of the 1950's segueing into the tumultuous climate of the following decade, the 60's. It is a time of political upheaval, of social change and assassination. The story opens however in the present (1990's) with Paul Stewart, a college professor, having a nervous breakdown while lecturing to his philosophy class.

Along the way we discover a dark secret of the professor's past - a secret which still haunts him in the present. "Heidegger in Ruins" is a coming of age drama, a story of failure, redemption, forgiveness and love.

A: I had heard much about Worldfest - it was one of the top festivals in the U.S., it has a good reputation and ranked high in the trade - and since I was sending my screenplay to other contests, I decided why not Houston.

My screenplay Heidegger in Ruins was a finalist - runners up in Scriptapalooza 2014; Quarterfinalist in Shore Scripts 2014; Semi-finalist in Circus Road 2014; Finalist in WeScreenplay 2014; and a Finalist in Screenplay Festival 2014.

A: Very Satisfied. Since I live in Germany, it will take a few weeks before I get my Silver Remi award.

A: On and off I spent a little over two years on the script. I don't write outlines. I just sit down at the computer and start writing. When I think I am finished, I put it in a drawer and six weeks or so later pick it up again. Then I try to make sense of it all. I begin the long hard task of re-writing. I wrote at least five drafts.

I know my method is not terribly efficient. But it is the only way I can write. I have been hit with a double whammy - dislexia and Attention Deficit Disorder (a terrible misnomer by the way). The one creates a lot of havoc with spelling and typing errors while the other renders me incapable of focusing on correcting the mistakes.

A: No. I have never had writer's block. I have so many ideas in my head that I won't be able to exhaust them till I die. I now have a list of 9 screenplays I definitely want to write and another 5 or 6 I am thinking about.

A: I have been an independent filmmaker for over 30 years - mostly documentaries. I have written, produced, directed and edited most of my films. I have written 7 screenplays - one sold on option, but never produced; another was produced and directed by me which won a Silver Plaque Award at the Chicago International Film Festival. My latest script I wrote in German and is being considered by German Television. We have applied for funding via the Baden Wurttemberg Film Funding Board and hope to begin principle photography in 2016. I will direct and edit.

In 2013 I produced a film by a young German director whom I mentored which was invited to the Cannes Film Festival in May 2013 in the Short Film Corner. It has won over 12 awards at other film festivals for best film, best editing, best director and for best screenplay.

A: I live in Germany. I would never dream to move to L.A. I live high on a hillside overlooking the beautiful Lake Constance. Across the lake is Switzerland and a beautiful panorama of snow-capped mountains.

The modern age of the internet makes it possible to live anywhere in the world if you are a writer.

A: I am presently editing a documentary I shot about the Freiburg Circle (a resistance group of professors at Freiburg University). We are in pre-production on a film to be shot in Germany in 2016. I wrote the script and will direct.