An interview with screenwriter Art Brown regarding the Wildsound Writing Competition. 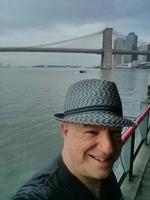 Art Brown
Q: What's the title of the script you entered in this contest, and what's it about?

A: "Brownie and Fran"

Brooklyn, NY 1948. The cold war is heating up, and mob entrenchment is at its peak. The U.S. is running a victory lap. Returning veterans want their share of the pie, and they're willing to strike for it. Two young idealists meet, fall in love, and set out to save the world - while not getting corrupted doing it. The young lovers are my parents, and most of their story is true.

A: I liked the feel and spirit of the wildsound festival site. I entered a few others as well. One of the major benefits, I've found is feedback - having a new pair of eyes on your project. I've gotten some amazing feedback from various contests - which has helped tremendously.

A: I began this script about 7 years ago - hit a stopping point and put it away in a drawer. Three years ago, directing a short play, I made the acquaintance of my collaborator (who had written the play I directed).

We went back and forth through many drafts (and a few readings), till arriving at the current version.

Midway through our collaboration, we realized the importance of an outline - a framework for continuity mainly.

A: Final Draft - I swear by it. It's also great for collaboration.

A: I generally do. I work as a stand-up comic and tech writer - so the words pour out like cheap wine from a hobo's bottle.

A: Start writing - or move my body somehow - take a walk or a run. It never helps to just stare at the screen - unless your fingers are moving (and no, that's not what I meant you filthy animal).

I was a lyricist for three years with the BMI Lehman Engels Musical Theatre Workshop (which gave us among others - "You're a Good Man, Charlie Brown", "Little Shop of Horrors", "Ragtime", and "Avenue Q").

I've written and performed over a dozen original musical-comedy reviews at NY cabarets and nightclubs, including, "Fay Wray and her Five Gorillas", and "Hey you! Come see our show and pay us!", as well as a one-man show, "Seven Ages".

I was the lead singer, songwriter, and rhythm guitarist in the punk era for a band called, "Deaf Ludwig"

A: 1) Moving this script forward to the screen. I believe it deserves to be a movie. It reveals a time and place where so many conflicting forces were in play, and it was unclear which would prevail. It's a tale with great historic scope and modern relevance. Worker's and civil rights vs the rise of the modern corporation. Organized crime's entrenchment in trade unionism. Themes still at play in the body politic - and two starry-eyed people skipping gleefully across the mine field.

3) I'm expanding a short slapstick comedy I wrote, directed and starred in - called, "The Return of Captain Schticklach!" You can watch it at www.ArtBrownProductions.com. Soon to be a feature.