Georgina Love was named a 2018 ScreenCraft Fellowship Winner for her sci-fi feature Pig, which follows an experimental scientist as he raises a sentient pig as a mirror image of his terminally ill son. When the pig learns his "father's" plans have a sinister bent, he fights to resist the inevitable. 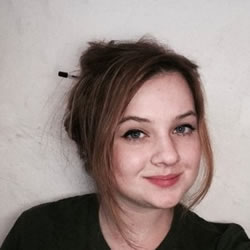 Q: What was the ScreenCraft Fellowship week like for you? What meetings did you take?

A: Fellowship week was amazing! I, like most writers, am a sucker for overthinking things and I needn't have been so worried. I was put up in the amazing Hollywood Roosevelt Hotel – where I mainly swanned around in a bathrobe. My fellow winners, Brock and Davia were wonderful and I was always grateful to have them in meetings with me. It was a team effort and we often complimented each other and gave each other segues into pitching our ideas and projects. In them, I feel that I have made lifelong collaborative partnerships. I had meetings with industry professionals including Cate Adams (Warner Bros.), Jonathan Wu (20th Century Fox), Wayne Horton (Netflix), Jeannette Francis (Bad Robot), Richard Ruiz, (Fox Searchlight), Steve Douglas (Sony Screen Gems) Mika Pryce (Universal Pictures), as well as a litany of producers and literary agents. I especially enjoyed the ScreenCraft legacy dinner, where I was able to meet past ScreenCraft Fellowship alumni and hear about how their careers were progressing. It gave a wonderful insight into all the amazing things to come!

Q: What are your top three key takeaways from ScreenCraft Fellowship week and the meetings you had?