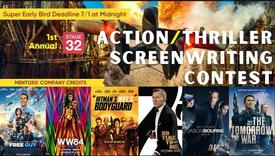 Action and Thriller feature films continue to dominate the Global Box Office! Thanks to classic franchises such as the TERMINATOR franchise, the JAMES BOND franchise, and the BOURNE franchise, as well as new hits like DEADPOOL, TAKEN, JOHN WICK, and most recently THE HITMAN’S WIFE’S BODYGUARD, the world is looking forward to more Action, Adventure, and thrills!

The Grand Prize winner will be flown to Hollywood to meet with executives from: ALL FINALISTS will be in a Stage 32 Look Book which includes their script title, logline & bio mailed to over 500 industry executives including, managers, agents, producers, development executives, and financiers! Stage 32 Look Books are respected throughout the industry and have helped secure dozens meetings and which have led to writer success with companies like Verve, Good Fear, 3 Arts, APA, Echo Lake, Amazon, UTA, CAA, WME, First Friday, Pathfinder, The Cartel, Black Bear Pictures, Lit Entertainment and many, many more.