Submit a TV SPEC SCREENPLAY or ORIGINAL TV PILOT (monthly deadlines) and get the chance to see your script read out loud at our Screenplay Festival using professional actors. Shown online on the YouTube channel that garners 1000s of views. CLICK the website link for examples of past winners.

A great way to get your words out there and obtain the Agent you're looking for or just get your script seen by more people.

Submit an original TV PILOT or a TV SPEC script from an existing show.

At least 20 winners a year who get their television screenplay performed at the Monthly Festival. Your script gets seen by the right people. ALL submissions receive full feedback from industry professionals. See USER COMMENTS section on reactions of our past winners and what it has done for their screenplay and careers.

An interview with screenwriter Molly Driscoll regarding the Wildsound/TV Writing Competition. 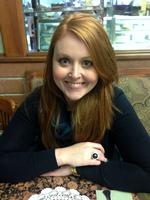 Molly Driscoll
Q: What's the title of the script you entered in this contest, and what's it about?

A: The heart of my Arrow Spec script lies within the title, "Second Chances." I wanted to explore why we give second chances and what makes some people take them and why others, unfortunately, don't. This script was originally conceived last spring, so it fits in the middle of the second season of Arrow. Oliver is struggling with his newly adapted "no kill" policy and with becoming a hero. OLIVER questions his mission and family loyalty when DIGG’s former lieutenant, RICK FLAG, threatens to make MOIRA pay for her unpunished crimes. Meanwhile, SARA visits LAUREL in rehab and ROY struggles with leading a double life from THEA. Back on the Island, Sara warns Oliver of SLADE’S increasing erratic behavior.

A: I was intrigued with the idea of real actors reading my script. Also, having a YouTube link to be able to email was a major plus because people are so overwhelmed with reading scripts everyday. This particular script made it to the Final Five in Final Draft's Big Break Contest this past December.

A: Yes, everyone at WILDsound has been great. The feedback was on point and prompt. Also, they have promoted it, as promised, and really seem to want to help the writer succeed.

A: I always outline before. This particular script didn't take as long as my orginal pilots have in the past. The first draft with outline, took about five weeks. Since then, there as been two large rewrites. Normally, my scripts undergo much more rewriting, but this one seemed to flow a bit more than others.

A: I always use Final Draft. For basic outlining and notes, I use good old Word. I am also a bit old school in the development phase. I like to write in a journal for free writing.

A: It depends on what stage I am in the project. In the development stage and first draft, I try to be very regimented with daily writing, usually averaging an hour to two hours a day. When it comes to later rewrites, they tend to be a bit more chaotic, sometimes including all day sessions. The one thing I try not to do is let more than two days go by without some sort of writing.

A: YES! Normally in a second draft or in the outlining phase. I try to write through it by eithering moving on to another scene or just writing the very "on the nose" version of the scene. Then I can go back to it later and rewrite. Also, sometimes I go and walk my dog. It's amazing what some fresh air and movement can do to open the mind up.

A: I am a creative director, at an adverstising agency. For the past ten years, I have written, cast and produced nearly a hundred commercials. I have written three screenplays, three spec teleplays and three original pilots.

A: I moved to Los Angeles four and half years ago and I am not really sure where the time went!

A: Yes. I am currently working on a new original pilot and new spec drama. I am a firm believer that you constantly have to be generating new material.