When Daniel Barnz heard his name announced as the grand-prize winner of CineStory's annual screenwriting awards for his screenplay Phoebe in Wonderland in 1996, he was thrilled.

"I remember this really vividly. We were in this auditorium, and they were announcing the winners. Mine was the last name that was called," Barnz said. "It was very suspenseful, and I felt elated, because it was the first competition that I had ever won as a screenwriter."

"It was just such an enormous boost to my confidence and particularly because I had left film school really considering myself primarily as a director," Barnz said. "It really shifted my perspective, and I thought, 'Oh, I can call myself a writer now too!'"

Barnz's experience at CineStory's annual retreat became one of the most important learning opportunities in his profession. It not only gave him the self-confidence to succeed, but it also helped him develop his talents and career as a screenwriter.

CineStory is a nonprofit educational organization dedicated to encouraging and supporting new screenwriters. Established in 1995, CineStory is based in Los Angeles with a retreat center in Idyllwild, California. It consists of film industry professionals who consult with screenwriters through mentorship programs, workshops, classes and retreats. CineStory aims to help screenwriters achieve the highest levels of creativity by instructing them in the basics of cinematic writing and by maintaining an active community of promising writers and supportive film experts.

The organization is primarily known for its annual screenwriting awards, where the grand prize winner receives a CineStory Fellowship. The fellowship includes a $2500 cash award, a one-year mentorship with two industry professionals, several magazine and screenwriting software subscriptions, and free tuition, meals and board at CineStory's annual retreat. 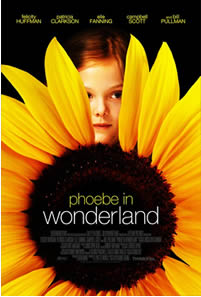 During the retreat, screenwriters have three one-and-a-half hour meetings with industry mentors and receive feedback on specific scripts and projects as well as potential 'next steps'. Screenwriters also take part in small group seminars led by their mentors that not only teach them more about the entertainment industry, but also help them figure out how to approach their writing and their careers.

Barnz was intrigued the moment he heard about CineStory. "I liked the idea that it was a competition but that you would go and there would be workshops and seminars, other people you could interact with," said Barnz. "It definitely made it, in my mind, a very unique kind of competition and experience."

So Barnz submitted Phoebe in Wonderland, his first screenplay, with high hopes. He was invited to attend the retreat, held that year in Chicago, as a finalist. He arrived to discover he was the grand prize winner.

Since his success with CineStory, Barnz has become an award-winning director and screenwriter. His film Phoebe in Wonderland, which debuted at the Sundance Film Festival in 2008, was nominated for the Sundance Grand Jury Prize for Drama. Barnz was also featured as one of the "25 New Faces of Independent Film" by Filmmaker Magazine in 2007 and named one of the "Top 10 Directors to Watch" by Variety Magazine in 2008.

Barnz grew up outside of Philadelphia, Penn. and is the first person in his family to pursue a career in the movie industry. Although he is a screenwriter and director today, Barnz was originally interested solely in theater. At Yale University, he majored in English and directed several plays. It wasn't until his senior year that he switched his focus to films.

"I was just panicking about what I was going to do with the rest of my life, and so I applied to a couple film schools," Barnz said. "There was just something in me that felt like film would have everything that I loved in theater, but a hundred times more."

Barnz was accepted into the film school at the University of Southern California, but even there, he concentrated on producing and directing. Only after graduation did Barnz learn how beneficial it was to be able to write screenplays.

"When I left film school, I realized that people just don't hire you to direct movies," Barnz said with a laugh. He quickly realized that a great way to get noticed by studios was to create his own material. "Again, I basically panicked and began writing. The very first thing that I wrote was Phoebe in Wonderland," Barnz said.

Inspired by magical realism, Barnz wrote the script in three months. "I thought that if I [had] the opportunity to make a film, and if I was only given one opportunity, then what would I want that film to be about?" Barnz explained. "So I began by making a list of all the things that were important to me - dramatically, character-wise - and I allowed that list to become the basis of the screenplay."

When Barnz discovered CineStory and their screenwriting contest, he decided to take a risk and submit his script. The result was an invaluable learning experience.

One of the most helpful lessons Barnz learned from CineStory's retreat was the importance of including visual directions into a script to help tell the story. "One of the things that I had worked really hard on in Phoebe in Wonderland was incorporating a sense of how the film would be directed into the screenplay itself," Barnz said. "It's really helpful for everyone - talent, financiers, producers - to see as much of the film as they can in the writing of it. That was a lesson that was really driven home at CineStory for me."

Best of all, Barnz loved how the retreat connected him with fellow professionals and screenwriters. "Writing is such a solitary profession that any time you have an opportunity to meet other writers and be part of a group and learn together and share experiences and be part of a community is very valuable," Barnz said. "As a writer you don't get that very often."

Since CineStory and Phoebe in Wonderland, Barnz has been consistently employed as both a screenwriter and director and has gone on to write and direct several films. He has been hired by numerous studios and has written screenplays for a number of big-name actors, including Mel Gibson, Jodie Foster, Leonardo DiCaprio and Bruce Willis. "I was afforded the opportunity to write in a lot of different genres and to explore a lot of different kinds of worlds and characters," Barnz said.

Barnz also made his debut as a director with the short film The Cutting Room in 2001, which tells the story of characters who were cut out of numerous movies, books and plays over time. And after nearly ten years of gathering the financing and cast for the film, Barnz directed and completed Phoebe in Wonderland in 2008, which earned him several award nominations and positive critical reviews.

His upcoming projects include the 2011 film Beastly, a modern-day version of Beauty and the Beast staring Vanessa Hudgens, Alex Pettyfer and Neil Patrick Harris, which he both adapted from the book and directed. Barnz is also working on a screenplay called Still I Rise, which tells the inspirational story of two women who take on education reform within their community.

Barnz continues to give back to CineStory today. Last year, he attended the annual retreat in Idyllwild to screen Phoebe in Wonderland. "There was something really gratifying about being able to go back to the retreat with one of the movies that won so many years earlier," Barnz said.

Barnz especially loves the idea of becoming a mentor to new screenwriters. He feels that helping other screenwriters is the perfect way to give back to CineStory.

And as a mentor, Barnz believes the best advice he can give other writers is the encouragement to dedicate themselves to their craft.

"Writing is like exercise," Barnz said. "If you force yourself to get all the way to the end of a screenplay by doing it really regularly, then you feel great." Most importantly, writers will have a completed script to show for their effort, something they can revise to make stronger. "There's actually something tangible there in front of you instead of that terrifying blank screen," Barnz said.

Through the years, Barnz's CineStory retreat experience has stuck with him, and he would recommend the organization to other screenwriters without question. As he continues to help with CineStory, he recognizes that the retreat still provides new screenwriters with the same levels of inspiration it gave him.

For Barnz, the most beneficial aspect of CineStory is how the organization establishes connections and creates a community of screenwriters. He finds the opportunity to meet other people who are struggling with the same questions and concerns about screenwriting to be truly uplifting.

"Writing is really hard. It's like you're giving blood at every moment," Barnz said. "It's just nice to know that there are other people out there who are doing the same thing, who are giving blood as well."

About the author: Maureen Fox received Bachelor of Arts degrees in English and communications-journalism from California State University, Fullerton (CSUF) in spring 2010 and is currently a graduate student in English at CSUF. Along with her academic work, Maureen writes as a freelancer for various organizations and maintains her own travel blog, www.openroadtraveler.blogspot.com, which provides travel advice to young adults. You can reach Maureen at mfox@csu.fullerton.edu.