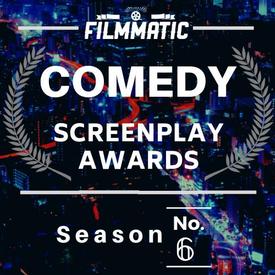 The Filmmatic Comedy Screenplay Awards were created to locate and expose up-and-coming comedic screenwriters, as well as to empower and educate those talented writers still waiting for their invitation into the mainstream film and television industries.

Competition is open to comedic feature-length and short works, screenplays and teleplays.

Please read the following Rules before entering. If you have questions, please feel free to email us at info@filmmatic.com, thanks!

1) Judges, as well as employees of InkTip.com, Screenwriting Staffing, Filmmatic.com and other sponsors are not eligible to enter the competition, nor are their affiliates or immediate family members.

2) All scripts must be submitted in English, and entry fees must be paid in U.S. dollars. Entry in the competition is void where prohibited by law.

3) All writers' names should be listed in the online entry form, "written by" credits are optional on the script/pilot file itself. By submitting online to the Filmmatic Comedy Screenplay Awards Competition, entrant warants that all writers have authorized the submission. If a screenplay is written by multiple authors, all cash and awards will be remitted to the entrant of record, with all proceeds to be divided at the writers' discretion.

4) To enter your script electronically, you must submit in one of the following formats: .PDF (preferred), Final Draft, Movie Magic Screenwriter, Microsoft Word, Rich Text Format, or Text.

5) Entries will not be returned. Be sure to retain a copy of all material submitted.

6) Entrants of the Filmmatic Screenplay Awards retain all rights to their screenplays.

7) You may submit your entry and payment either online through this website (see homepage) or through FilmFreeway/Coverfly. No preference will be given to submissions from any particular platform.

8) Entries must be received by the applicable Entry Deadline.

9) Once a script has been entered into competition, we will not accept substitutions or revised drafts. If you wish to submit a revised draft of your script, you must enter it as a new submission.

10) The Filmmatic Comedy Screenplay Awards will not share your screenplay with anyone except the official judges of the competition without prior permission.

11) By entering the Filmmatic Comedy Screenplay Awards Competition, you represent that your entry is your original work, and does not infringe on the copyright or other rights of other people or legal entities. Entrant indemnifies Filmmatic.com and its employees and subsidiaries and holds them harmless from any claims regarding infringement or dissemination of materials.

13) For environmental reasons, we no longer accept hardcopy submissions by mail.

14) Entrants can include author and/or contact information on their entry's cover page at their own discretion, but it is not required.

15) The decisions of the judges are final.

17) Notification of winners and official finalists will be sent by email and posted on our website. It is the responsibility of the winners to redeem any prizes allotted to them by the Filmmatic Comedy Screenplay Awards or our sponsors. Applicants will be repsonsible for providing current contact information and mailing addresses for prize redemption purposes.

Annie O'Connell & Reem Edan have been named the winner of the 2019 Filmmatic Comedy Screenplay Awards for their Pilot "The Degenerates".

WINNERS
Mustache, by Laura Murphy, Eileen Mathews
C U Next Tuesday, by Michele, by Yeo
The Go To Guy, by Alasdair Mcmullan
Fuck New Rome, by Erik Sternberger
The App, by, by Jeff Woodard
Rudy's Christmas Revenge, by Joanne Bellew
The Boys Are Back, by Jay Mullings
Playing Hero, by Nate Lane
One More Zero, by Toni Nagy
Jed Steele Ep 01:, "Wash, Dry, Fold, And Die", by Sean Whitley

FINALISTS
Burnin Bobby Mike Peters
The Locker Room Pat Battistini
All Caps, by, by Casey Seline
Mythical History, by Cecilia Michelangeli
Welcome to Highville, by David White
The Troubadour (aka Valets), by Gabe Johnson
Broski, by, by Brett Tietjen
Crushing It, by Hamilton Mitchell
GM, by Thomas Leupp
Off Peak Dads, by David Barish
Mismatch, by Martin Blinder
Once, In a Dry Season (or My Big Gay Divorce), by Howard Schreiber
Vampires For Beginners, by Boris Coll
Love Sick, by Sherrill Schmidt
Two's A Crowd, by Ed Wiles
The Worst Doug, by Gordon, by Hvolka
Mercy, by Bruce Kalish
Stone Cold Crazy Mother Tucker, by Katterina Powers
Henry & Molly, by Alexandra Corin Johnston
Art of Happiness, by Laurie Guzda
DNA, by Heather Farlinger
How We Got Laid, by Karolyn Carniekarolyn
Hooked TV Pilot, by Brittany Portman
Ghost Dad, by Vincent Venturella
In the Footsteps of Thaddeus Thackeray, by Adam McDaniel
Tilt, by Pearse Lehane
Jay Walking in Vegas, by Stephen Montagne
Robot Monkey Show: Episode 1, by John Lagerholm
Take Our Country Back!, by Bill Walker
Meet Cute, by Michael Charron
Movie Buffs!, by James Moye
Nutcrackers, by Chrissy Lessey
All The Way Happy, by Melinda Hicks
Hot, Sweaty, Animal Sex, by Helen Wentland
Sleepaway, by Sam Rosenberg
You Must Be Mistaken, by Fernando Segall
Rails, by Craig Miller
Starter Home, by Kathleen McMaster
Disco Daze, by Harrison Pierce
Clover County Paranormal, by Justin Moran
One Night At Coachella, by Coral dalessandro
In Too Deep: The Brian Futz Story, by Zack R. Smith
Fake News Blues, by Joe Grinstein
We'll Make Great Pets, by Joshua Poley
Blue Comedy, by Vincent Accettola
The Adventures of Dexter Burgees, by Harry Whitehead
Pet, by Pete Sailer
The Homestudy, by Derek Nicoletto
FUJH, by Margaret Colligan
Girl, You Better Chill, by Tracy Schumer
Cold Feat, by Trent Tackbary
J.P. Kimble, Wish Lawyer, by Patrick Allan Laffoon
Landlord of the Flies, by Mike Shephard, Mark A. C. Brown
Because Hades Won't Take Mobile Payments, by Jeff Racho
A Dead Romance, by Sean Ryan
Beadwindow, by Paul D. Mooney
Planet X, by "Politics As Usual", by Robert Cole
Raymond Carver Peels a Theoretical Onion, by James Fitzmaurice
Assisting, by Sally Ann Hall
Before I Go, by Logan Palmer
Crazy, by Holt Boggs
The Trouble With Parents, by Bruce kalish
Dommes, by Richard Sloggett
Escape to Acklyon, by Adam Lapallo
Working Title, by Michael Rojo
Terrordise, by V N Alexander
Chartered, by Joseph Kelly
Error 404 - Pilot, by L.A. Abbott
Illuminati, Confirmed, by Kevin Dembinsky
Boss, by Violet myers
Fugitive Cougar, by Jeff Cross
How Skin Face Got His Groove Back, by Ian Pozzebon
The King's Cadillac, by Jacki Moss
Let's Not Get Eaten, by Daniel Fishbayn
Mumbly Peg, by Mark Lesser
MegaBall$, by Marc Baron
Chester, by Erin Church
The Heel Turn, by Jordan Guingao
It's All Greek To Me, by Richard C Geiwitz
Mental, by Amy Haeussler
Alberto Jones and the Tempered Water of Doom, by Ty Caudle
The Second Coming of John Cooper, by Kevin Kraft
Tell Tale Wank, by James Everett
The Real Thing, by Matthew Papadopoulos
Invisible Boxes, by Bil Gaines
Thunder Ripper, by Jeff Walsh
Derby Dolls, by Patrick Norman
ATR (Available To Rent), by Alan C. Beard
The Bullpen, by (Pilot - New Kid in Town), by Jeff Nessel
I've Got Your Number, by Gene Gwynne
The Curse Of The Cum Rag, by Matt Clemons
Altered Egos, by Navid Nobakht
Turning Enemies Into Friends, by Paul Mahoney
Daddy, by John Xavier Miller
Institute, by Douglas Purdy
Jimmy Stewart and the Yeti's Hand, by Bruce Scivally
No Queen, by Val Bodurtha
The Eight Husbands of Catherine the Sixth, by Lance Barnett
Three Ladies of Orpington, by Daniel Guyton